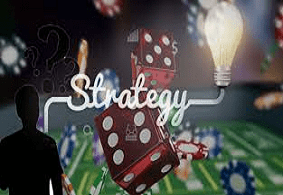 One of the greatest concerns of gambling fans is knowing just how to beat the odds of any game and emerge the winner. On our site we try to make things simple. Honing your skills to perfection is an excellent idea with regards to games that require an element of expertise such as blackjack.

But what about games which rely purely on chance and require no element of skill, such as slots or roulette? We examine some of the most relied upon gambling strategies by wagering fans under such circumstances.

What do you do when faced with a gambling game whose outcome relies purely on luck? Certain schools of thought among betting fans believe the best option lies in focusing on the one thing within your control under the circumstances, i.e., your expenditure or bankroll.

One of the most popular means of doing so is known as progression. This gambling strategy involves altering the size of your bets based on the success of preceding wagers.

Progression may be either positive or negative depending on whether you increase or decrease the size of the wagers you place in the event of a failed or successful bet. It is worth noting that both gambling strategies have their own unique sets of advantages and disadvantages as well as methods.

This method of progression involves your increasing the size of your bet after the previous wager you placed is successful and decreasing it when it is not.

The main advantages of this gambling method include the fact that most of the cash you wager with will belong to the casino rather than your bankroll, and the fact that it can be rather effective over a short period of time.

On the other hand, this method also comes with a few disadvantages too. These include its unsuitability for extended playing sessions and the fact that your luck could change during a game. Examples of positive progression gambling strategies include:

It is worth noting that it comes with the potential for stacking up profits on a short term basis and can enable you to make up for failed bets.